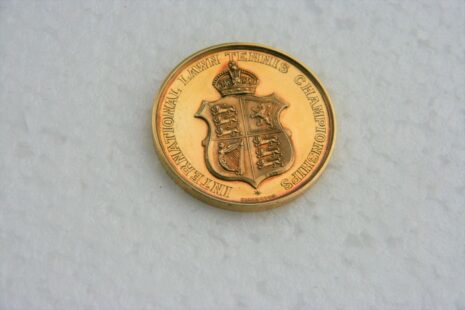 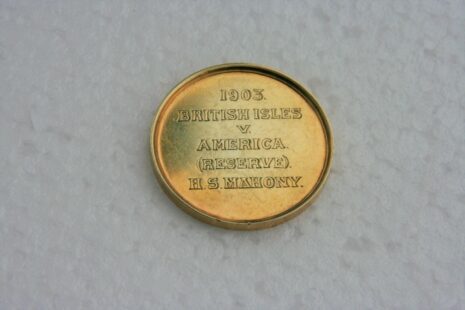 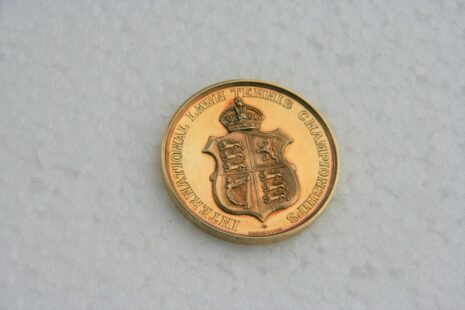 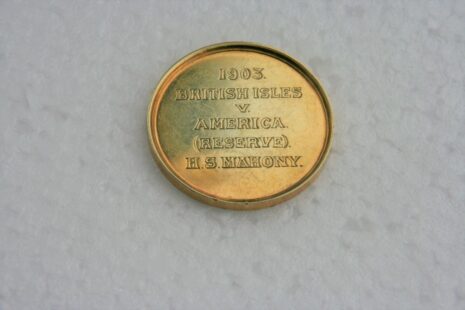 The International Lawn Tennis Championships as it was known later became the Davis Cup. This solid gold medal weighing 27 grams was awarded to Harold Mahony in the tie against the U.S.A. in 1903. Produced by Elkinton’s in 15 ct gold the front face bears the crest of the British Isles with engraving – International Lawn Tennis Championships – Elkinton. To the reverse the engraving reads – 1903 British Isles v America (Reserve) H. S. Mahony.

Harold Segerson Mahony (13 February 1867 – 27 June 1905) was a Scottish-born tennis player who is best known for winning the singles title at the Wimbledon Championships in 1896. His career lasted from 1888 until his death in 1905. Mahony was born in Scotland but lived in Ireland for the majority of his life; his family were Irish including both of his parents, the family home was in County Kerry, Southwestern Ireland. He was the last Scottish born man to win Wimbledon until the victory of Andy Murray at the 2013 championships.

Mahony was a member of the 1903 British Isles Davis Cup team that won against the United States at the Longwood Cricket Club in Boston but did not play in the event. When four-time Wimbledon champion Reginald Doherty had a shoulder injury the British team captain William Collins elected to forfeit his first match, instead of letting Mahony play, so that Doherty would be allowed to play the reverse singles match later in the event.

It appears that Harold Mahony intended to take part in the Wimbledon tournament of 1905, although he seems not to have played any competitive lawn tennis during the run-up. However, Harold Mahony was dead by the time the 1905 Wimbledon tournament began. He was killed in a bicycle accident at Caragh Lake, County Kerry, on 28 June 1905. He was only 38 years of age. According to the “Irish Times” of 29 June 1905:

“A fatal bicycle accident occurred yesterday at Caragh Lake, Co. Kerry, the victim being Mr Harold S. Mahony, J.P., of Dromore Castle, Kenmare. Mr Mahony was descending a steep hill when the accident occurred, and it is believed that he lost control of his machine.”

It appears that Harold Mahony’s bicycle hit a rock near the end of the hill, and he was thrown so violently from it that he broke his neck on impact with the ground. He had been dining at the Caragh Lake Hotel beforehand, and might also have drunk some alcohol, although no mention of this or of any post-mortem that might have been carried out was subsequently made. He was buried in the Mahony family plot in the graveyard in Templenoe, County Kerry.

The medal measures 3.75cms in diameter and is in excellent condition.

Note due to the high value of this item carriage is not included and can be discussed. It is likely to be sent by Royal Mail Special Delivery by 9am with additional insurance.